After 25 Years as Adman, Mike Shine Transitions to Full-Time Artist

These days, when an agency creative leaves her or his post, it's usually to: defect to another agency, hang a new shingle, head to the marketer side or explore Silicon Valley. 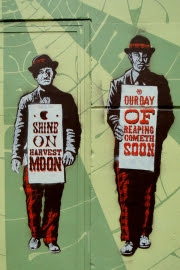 Mike Shine
For a crew that's so creative, it's rare that they leave just to go do more of what is it they do best. Stretch those creative muscles.
But that's exactly what Mike Shine will be doing as he departs California agency Butler, Shine, Stern & Partners to focus on his artwork -- which draws on a broad range of inspirations and ranges from graffiti to large installations. 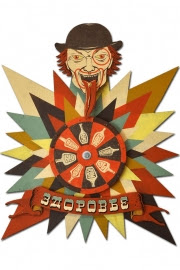 Mike Shine
He pays homage to early surf and skate culture by painting on driftwood he finds while catching waves. But he's also fascinated by the creepiness of American carnival culture and the dark side of Nordic mythology, having created interactive experiences inspired by both.
It's a far cry from his career as an adman. Mr. Shine and John Butler, partners for 25 years, were the first creative duo to exit Goodby Silverstein & Partners in San Francisco to start their own agency.
They opened it in 1993 and soon after Greg Stern joined the shop as its CEO. The Sausalito-based firm has stayed independent since then (and has no plans on selling anytime in the near future), working with clients such as Mini Cooper, Google, Priceline, Columbia Sportswear, Coca-Cola's Zico and a recent addition,U.S. Bank. In a note to employees, Mr. Butler talks about his friend and partner and explains that it's high time for him to get more recognition for his artwork. Read it below. 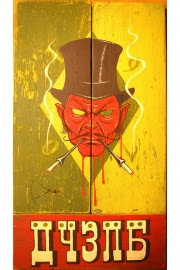 Mike Shine
And to check out more of Mr. Shine's work, head here.

He's been my partner for over 25 years, and he's always carried himself that way. Back when we were a young team at Chiat/Day in New York, when he wasn't writing and art directing ads with me, he was building furniture on the roof of his building in Manhattan. His apartment at the time looked like the love child of George Jetson and Alvar Aalto, and every bit of it was constructed on that roof, by hand.
If we were working on a print campaign, many times, Mike did the illustrations, or rendered the type by hand. I was usually the more patient one (that will blow a few minds I'm sure) so would wind up spending hours cutting it apart and designing the pieces, but much of it visually started with Mike. He was always a talented illustrator, with a solid aesthetic, and when it came to defining a look, nobody did it better.
As we moved west, to Goodby, Berlin & Silverstein, where we were fortunate enough to meet Stern, Mike kept making things in his spare time. It seemed like it didn't really matter what it was, in the end, the point was that it was something he did on his own, without a partner or a client or a budget telling him how it should be. Shortly after starting the company, in his spare time he renovated homes and built everything that went into them, from floor to ceiling, like a modern day Frank Lloyd Wright. And then he started putting things on the walls, which seemed to me like the final transformation.
In the midst of all of this, he helped to create a great agency. A place that is fun and creative, yet maddening and frustrating at times, as well. An agency that people leave (sadly, just about everyone leaves at some point,) yet one that no one ever fully leaves, as evidenced by the many who have come back to us for a second and third stint, and that speaks volumes.
And now, as Mike has told you, it's his time to leave. His exposure as an artist has reached a level that will take him out of here more and more frequently, so it seemed like the timing was right to make the jump. He goes with love and support from both Greg and me—he'll be missed, but he'll be doing what he loves to do—making stuff. He continues to be one of the most talented people I have ever worked with— he'll always be a founding partner to me, and this place wouldn't ever have come into existence without him.
I wanted you all to know that this is something that we've talked about for a while, and planned for. The three of us have never bought into the whole cult of personality thing—this place is and continues to be as good as the people who are here. And to that point, we've spent a good bit of time these past 5 years cultivating and training a crew of very talented CDs and ACDs who will continue to do what they do, creating exceptional brand stories for our clients, on a day to day basis.
I imagine you'll see Mike here from time to time. Hopefully we can snare him to help us with a pitch or something along the way. Because as I said earlier, you never really leave this place.
Thanks, John