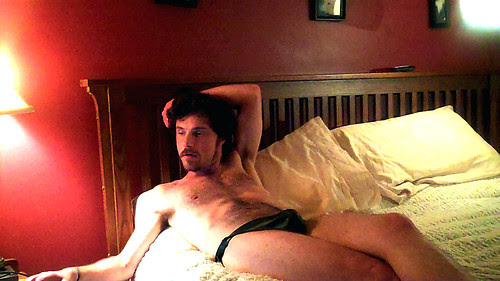 Will Someone please tell me exactly what is so controversial about a Method Actor/Conceptual Artist creating an artwork to promote HIV awareness? Particularly to his own community. My goodness how backwards has our society become?

So this is Christmas, huh. Another year over and a new one about to begin. "What year is it anyway?" Robert thinks to himself. The last few years have all just sorts blurred themselves together in his mind. Bouncing around from house to house and state to state. Going where the cool wond Takes him. Ya dig! In one of Roberts rare moments of clarity he remembers to take his Atripla. "I hope these work this time" he says. He sure is happy with his gay doctor who understands him and his current lifestyle enough to give him the HIV drug prophylactically. Cuz the last few nights have been so unforgettable they remain a blur. With all of these guys throwing around all of these letters, T, C, G and D and no one stopping for a moment to even ask if he's poz. Let alone put on a condom. Condoms in this world are the taboo. What a word, what a christmas. Oh well, thinks robert, here's to a happy New Year.

David S Pollack aka Chase Alias hopes to bring to light with his new Endogenous Series how backwards moving our cultural standards have become. As an Immersionist he look back in envy at the freedoms which artists used to be able to express themselves without having to worry about cultural and even legal action being taken against them.

This is a role being played by Chase Alias an actor. But for way too many young gay men out in the world, lost and alone, they play this role every day. Lets keep our wits about us when we go to blow our minds.