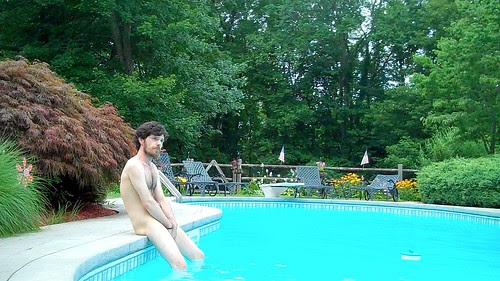 Chase Alias' Summer Haze: From the Series, "Chase Alias' Esoterically Speaking Causes his Reclusively Being, 2010-2012, a photo by Chase Alias :)(: on Flickr.

Via Flickr:
From the Series, "Chase Alias' Esoterically Speaking Causes his Reclusively Being, 2010-2012

The very purpose of spirituality is self-discipline. Rather than criticizing others, we should evaluate and criticize ourselves. Ask yourself, what am I doing about my anger, my attachment, my pride, my jealousy? These are the things we should check in our day to day lives. -Dalai Lama - 5:40 AM - Public

David S Pollack aka Chase Alias hopes to bring to light with his new series, "Chase Alias' Esoterically Speaking Causes his Reclusively Being, 2010-2012", attempts to convey just how backwards moving our cultural standards seem feels to Chase. As a self portrait photographer he look back in envy at the freedoms which artists used to be able to express themselves without having to worry about cultural and even legal action being taken against them.