Ai Weiwei is Being Watched by REID SINGER | Theorize Art

Ai Weiwei is Being Watched 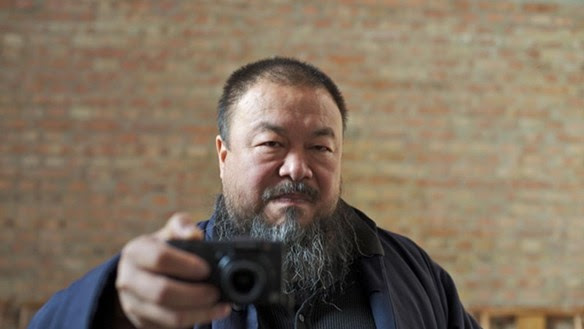 Young journalists who gripe about the lack of opportunities to make their talents known should take a lesson from Alison Klayman. While her documentary, “Ai Weiwei: Never Sorry,” has profited handily from certain accidents of timing, it’s obvious that she has made her own good luck. Now, she’s reaping the rewards. As it debuts at Sundance this weekend, “Never Sorry” is being pre-emptively treated by critics as a highlight of the festival.
This took work. Klayman first met Ai in 2008, when he was making art and documentary films directed at the government’s response to the “tofu skin” schools that collapsed during the Sichuan earthquake. She then accompanied him to Chengdu, where police did their thuggish best to prevent him from testifying on behalf of a fellow investigator in the schools’ faulty construction, which led to the deaths of thousands of children. Audiences are treated to a fairly badass scene of Ai walking up to the driver of an unmarked car to ask: “Are you following me?” No less dramatic is the footage of police kicking down the door of his hotel room in the middle of the night to confront him physically: in the dark, one young officer makes a point of sucker-punching Ai in the temple. Moments later, his superior asserts that Ai caused the bruises himself.
From Chengdu, Klayman recounts most of Ai’s career up to the present day. She includes interviews with fellow activists, testimony from assistants, family members, and close friends, as well as commentary from journalists like Evan Osnos. Following Ai to museums around the world, she is close by as reporters talk to the artist about his installation of sunflower seeds at the Tate Modern. Drawing on a range of experts, Klayman became one herself; she knew Ai well by the time his studio in Shanghai was torn down by the Chinese government in 2010, and was more or less an insider to the story of his detention for vague “economic crimes” last spring. Since watching excerpts at a screening on Monday, I have tried – and failed – to think of a better phrase than “perfect storm.”
This applies as much to Ai as it does to the documentary about him. Educated in the exceedingly fertile art scene of downtown New York in the early 80s, Ai anchored himself to developments in Conceptualism and neo-Dada, and eventually brought them back home. In the run-up to the 2008 Summer Olympics, his reputation led to a commission to design the Beijing National Stadium in collaboration with the Swiss firm Herzog & de Meuron. Ai has had the advantage of being the son of one of China’s most renowned poets, and as long as he was good to the Chinese cultural establishment, the system was good to him.
Since the stadium’s construction, however, his behavior in public has been increasingly defiant, and strikingly well-suited to American taste. Ai’s first real appearance in the English-speaking press took place when he described the Olympics as a shallow agent of propaganda. Telling reporters that he was “ashamed” to be a part of it, he touched on American cravings for bombastic populism and dissent. When the unfriendly visit by the Chengdu police left him with a brain hemorrhage, Ai tweeted a photo of himself from his hospital bed, flicking off the officer who punched him. We are appalled by abuses of power, strive to identify with victims, and adore rebels. So does he. Like his goofy haircuts and exhibitionist Internet memes (particularly those involving nudity), Americans have lapped up Ai’s dissidence like honey.
“Never Sorry” doesn’t do much to complicate the West’s perception of Ai Weiwei as a hero, presenting his “talent” for Hollywood-style celebrity rather uncritically. Potentially murky areas, like Ai’s rumored womanizing and the child he had out of wedlock, are given only marginal mention (Ai’s wife, Lu Qing, has denied both allegations). Omissions like these, however, don’t prevent “Never Sorry” from being a vigorous, thoughtful piece of documentary filmmaking with something to say – often quite movingly. “Of all the Chinese artists I know,” says one Chinese gallerist, “he’s probably the only one who deep down cares about this country and what happens to it. Weiwei would put his life on the line for something that he believes in.” Praise for Ai that might have otherwise sounded hyperbolic, in Klayman’s hands, feels deeply sincere. She manages to create a delicate portrait of a bold, soft-spoken man, who lately has been getting punched in the face.
Tagged as: Ai Weiwei, alison klayman
Email Post
Labels: Ai WeiWei by REID SINGER Chase Alias Theorze Art