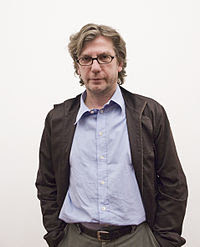 Thomas Ruff
Thomas Ruff (born 10 February 1958 in Zell am Harmersbach) is an internationally renowned German photographer who lives and works in Düsseldorf. 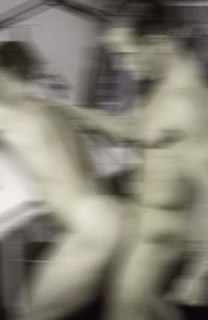 Thomas Ruff, one of six children, was born in 1958 in Zell am Harmersbach in the Black Forest, Germany. Ruff was an academic child excelling in maths and science. At an early age he became interested in astronomy and bought a small telescope. In the summer of 1974 Ruff acquired his first camera and after attending an evening class in the basic techniques of photography he started to experiment, taking shots similar to those he had seen in many amateur photography magazines.[1]
Ruff studied photography from 1977 to 1985 with Bernd and Hilla Becher at the Kunstakademie Düsseldorf (Düsseldorf Art Academy), where fellow students included the photographers Andreas Gursky, Candida Höfer, Reinhard Mucha, Klaus Rinke, Thomas Struth, Angelika Wengler, and Petra Wunderlich. In 1982, he spent six months at the Cité Internationale des Arts in Paris. In 1993 he was a scholar at Villa Massimo in Rome. Ruff names Walker Evans, Eugene Atget, Karl Blossfeld, Stephen Shore and William Eggleston as his main influences.[2] From 2000 to 2005 Ruff taught Photography at the Kunstakademie Düsseldorf.

In 1979, to finance his studies, Ruff worked for a commercial photographer who made brochures for the building industry. During his studies in Düsseldorf and inspired by the lectures of Benjamin HD Buchloh, Ruff developed his method of conceptual serial photography. Ruff began photographing landscapes, but while he was still a student he transitioned to the interiors of German living quarters, with typical features of the 1950s to 1970s. This was followed by similar views of buildings and portraits of friends and acquaintances from the Düsseldorf art and music scene, initially in small formats. The Portraits depict the individual persons framed as in a passport photo, typically shown with emotionless expressions, sometimes face-on, sometimes in profile, and in front of a plain background.[3] His early portraits were black-and-white and small, but he soon switched to color, using solid backgrounds in different colors. He began to experiment with large-format printing in 1986, ultimately producing photographs up to seven by five feet in size.[4] In a discussion with Philip Pocock (Journal for Contemporary Art, 1993), Ruff mentions a connection between his portraits and the police observation methods in Germany in the 1970s during the German Autumn.
Ruff intended that large groups of the approximately eight-by-ten-inch color portraits would be hung together, so to add variety he photographed each person against a colored backdrop. By 1987 Ruff had distilled the project in several ways, settling on an almost exclusive use of the full frontal view, eliminating the colored backdrop in favor of unvarying white, and enlarging the finished work to monumental proportions.[5]
Thomas Ruff's building portraits are likewise serial, and have been edited digitally to remove obstructing details – a typifying method, which gives the images an exemplary character. Of these Ruff notes, "This type of building represents more or less the ideology and economy in the West German republic in the past thirty years." 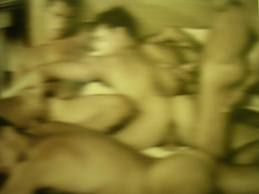 These first series were followed in 1989 by images of the night sky, Sterne, which were not based on photographs by Ruff, but rather on archived images ('Catalogue of the Southern Sky', including 600 negatives) he had acquired of the European Southern Observatory in the Andes in Chile. These photographs of the stars, taken with a specially designed telescopic lens, are described and catalogued with the precise time of day and exact geographic position. From these photographs, Thomas Ruff selected specific details which he then enlarged to a uniform size.[6] In the years from 1992 to 1995, during the first Gulf War, Ruff produced his Nacht series (1992–96), night images of exteriors and buildings using the same night vision infrared technology developed for use, both military and in broadcast television, during the Gulf War. In 1994 to 1996 these were followed by Stereoscopy images, and another series in the 1990s, Zeitungsfotos, consisted of newspaper clippings enlarged without their original subtitles.
In 1999 the artist made a series of digitally altered photographs of Modernist architecture by Mies van der Rohe. The series l.m.v.d.r. - the initials of the architect - began as a commission offered to Ruff in 1999-2000 in connection with the renovation of Haus Lange and Haus Esters in Krefeld, Germany. Having worked with architectural subject matter since the mid-1980s, Ruff was enlisted to photograph the Krefeld buildings as well as the Barcelona Pavilion and the Villa Tugendhat in Brno.[7]
In 2003 Thomas Ruff published a photographic collection of "Nudes" with a text by the French author Michel Houellebecq. Ruff's images here are based on Internet pornography, which was digitally processed and obscured without any camera or traditional photographic device. In 2009, the Aperture Foundation in New York published jpegs, a large-scale book dedicated exclusively to his monumental series of pixilated enlargements of internet-culled images, all compressed using the standard JPEG format.[8][9]which intentionally uses JPEG artifacts. His Substrat series (2002–03), based on images from Japanese manga and anime cartoons, continued this exploration of digitally altered Web-based pictures. However, he alters and manipulates the source material such that the work becomes an abstraction of forms and colors with no visual memory of the original source material.[10] On February 7, 2011, one of his Nudes pictures appeared on the cover of New York Magazine.[11] 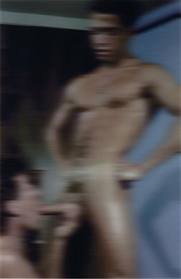 The artist's most recent series, zycles and cassini draw from scientific sources. zycles are based on 3D renderings of mathematical curves that were inspired by Ruff's encounter with copperplate engravings found in antique books on electromagnetism, and thecassini works are based on photographic captures of saturn taken by NASA. Ruff has transformed the raw black-and-white prints with interjections of saturated colour.[12]
After a number of collaborations with Swiss architects Herzog & de Meuron, the firm designed a studio building for Ruff and Gursky in Düsseldorf. Ruff is represented by David Zwirner, New York, Johnen Galerie, Berlin, and Galerie Wilma Tolksdorf, Frankfurt.
Email Post
Labels: Chase Alias Theorize Art Thomas Ruff