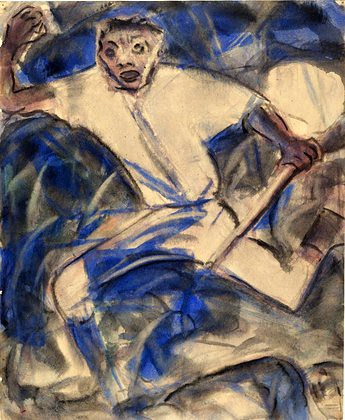 Christian Rohlfs was a German painter and printmaker who worked in an Expressionist style. Rohlfs studied art in the 1870s in Weimar, Germany, where he was schooled in a naturalistic figure painting tradition. Until about age 50, Rohlfs painted large landscapes in the style of academic realism. During the 1880s, color became an increasingly important element in his work. Working independently, he developed a freely colorful style similar to that of French Impressionism.

The turning point of Rohlfs’s career came with his discovery of Post-Impressionism about 1900. The paintings of Vincent van Gogh in particular profoundly influenced him. Inspired by van Gogh’s bold colors and vigorous brushwork, Rohlfs developed a new, more personal and sensitive style, an early example of which can be seen in St. Patroclus in Soest (1905–06). About this time, Rohlfs painted with his friend Emil Nolde, who was associated with a group of young Expressionist artists known as Die Brücke (“The Bridge”). Although Rohlfs never became a member of the group, he was influenced by the Brücke painters’ spontaneous, emotional approach. After seeing an exhibition of prints by these artists in 1907, Rohlfs became a prolific printmaker, creating boldly designed works such as the woodcut Death and Child (1912–13). In 1937 the Nazis declared his work “degenerate” and forbade him to exhibit.