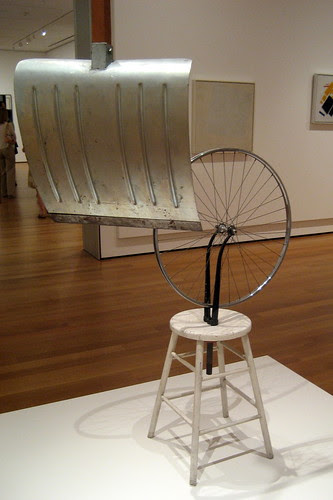 The Sidney and Harriet Janis Collection

Gallery label text, Dada, June 18–September 11, 2006:
Although Duchamp had collected manufactured objects in his studio in Paris, it was not until he came to New York that he identified them as a category of art, giving the English name "Readymade" to any object purchased "as a sculpture already made." When he modified these objects, for example by mounting a bicycle wheel on a kitchen stool, he called them "Assisted Readymades." Duchamp later recalled that the original Bicycle Wheel was created as a "distraction": "I enjoyed looking at it, just as I enjoy looking at the flames dancing in a fireplace."

Bicycle Wheel is Duchamp's first Readymade, a class of artworks that raised fundamental questions about artmaking and, in fact, about art's very definition. This example is actually an "assisted Readymade": a common object (a bicycle wheel) slightly altered, in this case by being mounted upside-down on another common object (a kitchen stool). Duchamp was not the first to kidnap everyday stuff for art; the Cubists had done so in collages, which, however, required aesthetic judgment in the shaping and placing of materials. The Readymade, on the other hand, implied that the production of art need be no more than a matter of selection—of choosing a preexisting object. In radically subverting earlier assumptions about what the artmaking process entailed, this idea had enormous influence on later artists, particularly after the broader dissemination of Duchamp's thought in the 1950s and 1960s.

The components of Bicycle Wheel, being mass-produced, are anonymous, identical or similar to countless others. In addition, the fact that this version of the piece is not the original seems inconsequential, at least in terms of visual experience. (Having lost the original Bicycle Wheel, Duchamp simply remade it almost four decades later.) Duchamp claimed to like the work's appearance, "to feel that the wheel turning was very soothing." Even now, Bicycle Wheel retains an absurdist visual surprise. Its greatest power, however, is as a conceptual proposition.