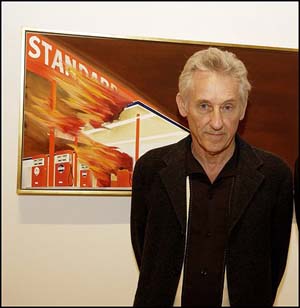 From Wikipedia, the free encyclopedia
Edward Joseph Ruscha IV (roo-SHAY; born December 16, 1937) is an American artist associated with the Pop art movement. He has worked in the media of painting, printmaking, drawing, photography, and film. Ruscha lives and works in Culver City, California. [1]

While in school in 1957, Ruscha chanced upon then unknown Jasper Johns’ Target with Four Faces in the magazine Print and was greatly moved. Ruscha has credited these artists’ work as sources of inspiration for his change of interest from graphic arts topainting. He was also impacted by Arthur Dove’s 1925 painting Goin’ Fishin’, Alvin Lustig's cover illustrations for New Directions Press, and much of Marcel Duchamp’s work. In a 1961 tour of Europe, Ruscha came upon more works by Johns and Robert Rauschenberg, R. A. Bertelli’s Head of Mussolini, and Ophelia by Sir John Everett Millais. Some critics are quick to see the influence of Edward Hopper's Gas (1940) in Ruscha's 1963 oil painting, Standard Station, Amarillo, Texas.[3] In any case, "Art has to be something that makes you scratch your head," Ruscha said. 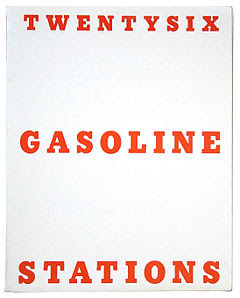 Twentysix Gasoline Stations, 1963 by Ed Ruscha
Although Ruscha denies this in interviews, the vernacular of Los Angeles and Southern California landscapes contributes to the themes and styles central to much of Ruscha’s paintings, drawings, and books. Examples of this include the book Every Building on the Sunset Strip (1966), a book of continuous photographs of a two and one half mile stretch of the 24 mile boulevard. Also, paintings like Standard Station, Large Trademark, and Hollywood exemplify Ruscha’s kinship with the Southern California visual language. Two of these paintings, Standard and Large Trademark were emulated out of car parts in 2008 by Brazilian photographer Vik Muniz as a commentary on Los Angeles and its car culture.
His work is also strongly influenced by the Hollywood film industry: the mountain in his Mountain Series is a play on the Paramount Pictures logo; Large Trademark with Eight Spotlights (1962) depicts the 20th Century Fox logo, while the dimensions of this work are reminiscent of a movie screen; in his painting The End (1991) these two words, which comprised the final shot in all black-and-white films, are surrounded by scratches and streaks reminiscent of damaged celluloid.
Ruscha completed Large Trademark with Eight Spotlights in 1961, one year after graduating from college. Among his first paintings (Su, Sweetwater, Vicksburg) this is the most widely known, and exemplifies Ruscha’s interests in popular culture, word depictions, and commercial graphics that would continue to inform his work throughout his career. Large Trademark was quickly followed by Standard Station (1963) andWonder Bread (1962). In Norm’s, La Cienega, on Fire (1964), Burning Gas Station (1965–66), and Los Angeles County Museum of Art on Fire (1965–68), Ruscha brought flames into play.[4] In 1966, Ruscha reproduced Standard Station in a silkscreen print using a split-fountain printing technique, introducing a gradation of tone in the background of the print.
In 1985, Ruscha begins a series of "City Lights" paintings, where grids of bright spots on dark grounds suggest aerial views of the city at night.[5] More recently, his "Metro Plots" series chart the various routes that transverse the city of Los Angeles by rendering schematized street maps and blow-ups of its neighborhood sections, such as in Alvarado to Doheny (1998).[6] A 2003 portfolio of prints called Los Francisco San Angeles shows street intersections from San Francisco and LA juxtaposed one over the other.[7] 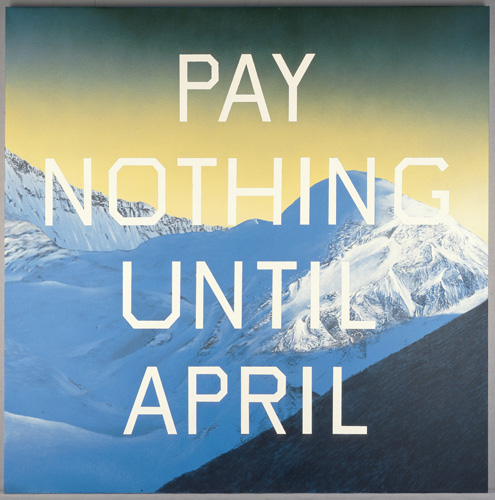 The very first of Ed Ruscha's word paintings were created as oil paintings on paper in Paris in 1961.[8] Since 1964, Ruscha has been experimenting regularly with painting and drawing words and phrases, often oddly comic and satirical sayings alluding to popular culture and life in LA. When asked where he got his inspiration for his paintings, Ruscha responded, “Well, they just occur to me; sometimes people say them and I write down and then I paint them. Sometimes I use a dictionary.” From 1966 to 1969, Ruscha painted his “liquid word” paintings: Words such as Adios (1967), Steel (1967–9) and Desire (1969) were written as if with liquid spilled, dribbled or sprayed over a flat monochromatic surface. His gunpowder and graphite drawings (made during a period of self-imposed exile from painting from 1967 to 1970)[9] feature single words depicted in a trompe l’oeil technique, as if the words are formed from ribbons of curling paper. In the 1970s, Ruscha, with Barbara Kruger and Jenny Holzer, among others, began using entire phrases in his works, thereby making it a distinctive characteristic of the post-Pop Art generation.[10] In the early 1980s he produced a series of paintings of words over sunsets, night skies and wheat fields. Later, words appeared on a photorealist mountain-range series which Ruscha started producing in 1998.[11]
From 1980, Ruscha started using an all-caps typeface of his own invention named ”Boy Scout Utility Modern” in which curved letter forms are squared-off (as in the Hollywood Sign)[12] This simple font which is radically different from the style he used in works such as Honk (1962).[13] 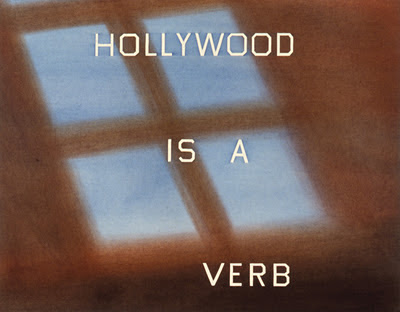 In his drawings, prints, and paintings throughout the 1970s, Ruscha experimented with a range of materials including gunpowder, vinyl, blood, red wine, fruit and vegetable juices, axle grease, chocolate syrup, tomato paste, bolognese sauce, cherry pie, coffee, caviar, daffodils, tulips, raw eggs and grass stains. Stains, an editioned portfolio of 75 stained sheets of paper produced and published by Ruscha in 1969, bears the traces of a variety of materials and fluids. Ruscha has also produced his word paintings with food products on moiré and silks, since they were more stain-absorbent. However, these most vibrant and varied organic colourings usually dried to a range of muted greys, mustards and browns.[14] His portfolio Insects (1972) consists of six screen prints – three on paper, three on paper-backed wood veneer, each showing a life-like swarm of a different meticulously detailed species.

In the 1980s, a more subtle motif began to appear, again in a series of drawings, some incorporating dried vegetable pigments: a mysterious patch of light cast by an unseen window that serves as background for phrases such as WONDER SICKNESS and99% DEVIL, 1% ANGEL (1983). By the 1990s, Ruscha was creating larger paintings of light projected into empty rooms, some with ironic titles such as An Exhibition of Gasoline Powered Engines (1993).

Ruscha's first major public commissions include murals at the Museum of Contemporary Art, San Diego (1966) and the Great Hall of Denver Public Library in Colorado (1995). In 1985 Ruscha was commissioned to design a series of fifty murals for the rotunda ofMiami–Dade Public Library (now the Miami Art Museum) in Florida, designed by architects Philip Johnson and John Burgee.[15]
In 1998, Ruscha was commissioned to produce a large painting entitled PICTURE WITHOUT WORDS, for the lobby of the Harold M. Williams Auditorium of the Getty Center.[16] The artist was later commissioned by the M. H. de Young Memorial Museum to create two large-scale paintings that flank his A Particular Kind of Heaven (1983), which is in the museum’s collection, to form a spectacular, monumental triptych.[17] In 2008, he was among four text-based artists that were asked by the Whitechapel Gallery to write scripts to be performed by leading actors; Ruscha's contribution was Public Notice (2007). To celebrate the San Francisco Museum of Modern Art (SFMOMA)'s 75th anniversary, Ruscha was one of the artists invited to collaborate with the museum on a limited-edition of artist-designed T-shirts.[18] Ruscha is regularly commissioned with works for private persons, among them James Frey (Public Stoning, 2007),[19] Lauren Hutton (Boy Meets Girl , 1987),[20] and Stella McCartney (Stella). In 1987, collector Frederick Weisman commissioned Ruscha to paint the exterior of his private plane, a Lockheed JetStar.
Email Post
Labels: Chase Alias Edward Ruscha Theorize Art