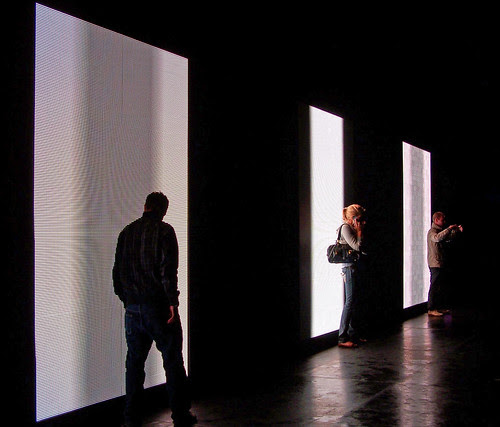 Via Flickr:
United Visual Artists are a multidisciplinary arts company combining art direction, production and software engineering. They create responsive, immersive and sculptural light-based environments. At the TodaysArt Festival 2007 they presented three brooding presences that respond to the movements of people approaching them, creating a visceral experience of sound and light.

During the third edition of the TodaysArt Festival (September 21th and 22th 2007) the city centre of The Hague functioned as one big festival terrain, with performances both in the public domain and on several indoor stages. Interactive installations, projections and acts used the city centre as a stage and transformed The Hague into an inspiring stronghold of audiovisual experiences. The program consistsed of more than 200 artists from over 25 countries, representing nearly every art discipline imaginable and putting The Hague on the international map as the stage par excellence for contemporary creativity.

See where this picture was taken.