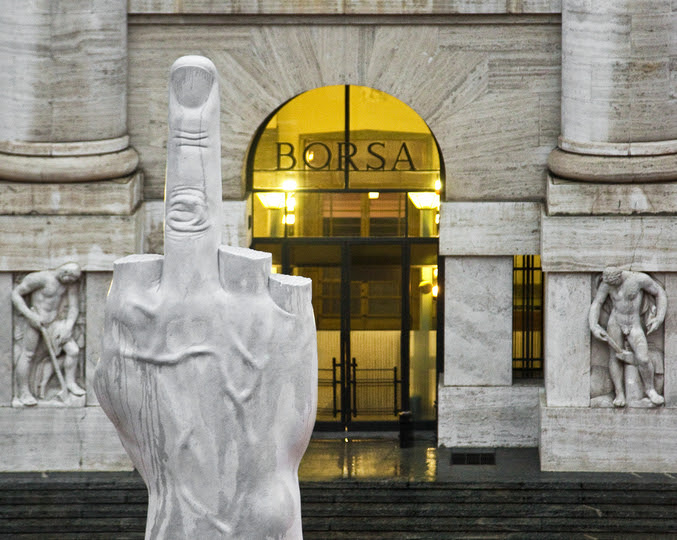 Maurizio Cattelan, L.O.V.E., 2010. Courtesy of the Solomon R. Guggenheim Museum.
The latest New York City museum shows have us watching these four artists. At the Whitney,Aleksandra Mir seduces Galileo and collages saints with Saturn V rockets. Though many have tried,Doug Rickard’s series at MoMA may be the first successful photography project based entirely on images from Google Street View. Maurizio Cattelan goes into retirement with one final prank at the Guggenheim, dangling an entire career of work from the ceiling of the rotunda. Finally, Clifford Owens assembles an all-star team of African-American artists to score performance works for his solo show at MoMA PS1 in November. 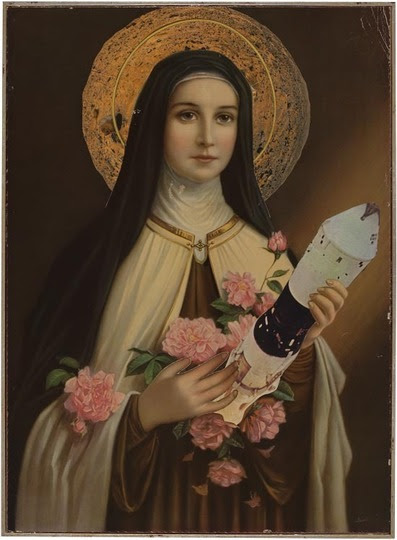 Aleksandra Mir, The Dream and the Promise series, 2009, collage. Courtesy of the Whitney Museum of American Art.
Polish-born artist Aleksandra Mir studied at New York’s School of Visual Arts and traveled the world to create work that deals with institutions from religion and politics to entertainment. In The Seduction of Galileo Galilei at the Whitney Museum, Mir’s seduction takes the form of a gravitational experiment inspired by Galileo. In the video, Mir gleefully instructs a crane operator to stack tires until they topple over. The work doesn’t speak so much to the friction between science and religion as the legends and mythologies around Galileo himself. Also on view are collages from Mir’s seriesThe Dream and the Promise, which pair religious icons with space travel, galaxies, and nebulae. 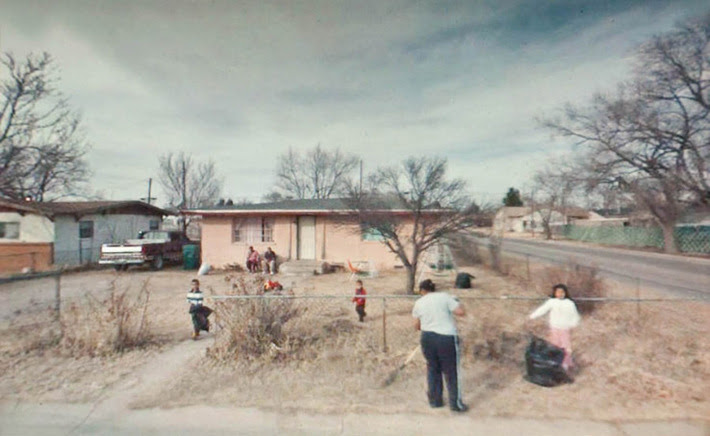 Doug Rickard, #104.573110, 2008. Courtesy of MoMA.
Doug Rickard draws from Google Street View, as well as his background in history and sociology, for his series A New American Picture on view in MoMA’s New Photography 2011 exhibition. Scouring the country’s economically depressed regions online, the artist emerges with stirring images of social inequality. The images are often bleak, depicting a broken-down, worn-through view of the nation. The absence of the photographer, replaced by the generic, roving eye of Google, is intrinsic to the work, presented as a strange, new kind of FSA project. Rickard photographed his computer screen with a digital camera, retouching and reformatting the images to remove evidence of Google. Rickard’s series is certainly not the first photography project to make use of Google Street View, but it is by far the most successful we’ve seen. 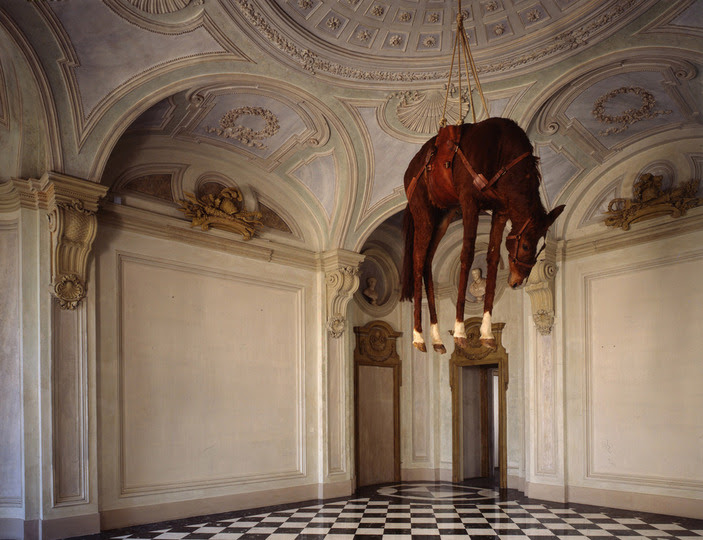 Maurizio Cattelan, Novecento, 1997. Courtesy of the Solomon R. Guggenheim Museum.
Maurizio Cattelan’s retrospective at the Guggenheim spans work from the 1980s through today. The Italian-born artist, notorious for tricks, jokes, and mayhem, once claimed a sculpture had been stolen only to exhibit the resulting police write-up in a group show. For his self-portrait, he hung a donkey from the ceiling as a chandelier. Instead of displaying his work on the Guggenheim’s spiral ramps, Cattelan insisted on hanging all 130 pieces from the ceiling of the museum’s rotunda. Borrowed from public and private collections around the world, notable pieces include a sculpture of the Pope trapped under a meteorite, a squirrel suicide, and a boyish Hitler praying. Cattelan has admitted to growing tired of serving up new provocations for each exhibition, and he claims this survey marks his retirement from, as he calls it, the prison of being an artist:
There was always a goal. Work was always necessary to survive. Then I decided the goal should be to survive without working. But now I have much more work than I had before. … Hunting for freedom, I’ve found the real prison. But at least it’s a prison I’ve chosen for myself.

Clifford Owens, Anthology (Senga Nengudi), Courtesy of MoMA PS1 & On Stellar Rays.
Clifford Owens aims his first solo show in a New York museum at the under-recognized tradition of African-American performance art. Anthology at MoMA PS1 is based around original performance scores, “written or graphical instructions for actions,” contributed by an all-star cast of twenty-six African-American artists, including Derrick Adams, Sanford Biggers, Glenn Ligon, Shinique Smith, and Kara Walker. During the summer of 2011, while Owens had a residency at MoMA PS1, he enacted the performance scores across nearly every surface of the structure, from the boiler room to the attic. The show, opening in mid-November, features photographs, objects, and video from the summer, as well as live performances.